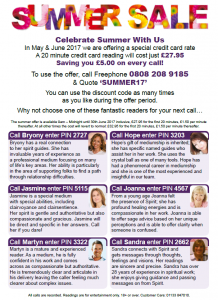 Celebrate the beginning of summer with Psychic Sight, we are offering all of our loyal clients a discount of £5 off every credit card call.

If you are not sure who to have your reading with then why not visit our ‘Readers’ page, where you will find profiles on all of the psychics and mediums available. On the right hand side of the page you will see the live availability telling you who is available to take a call right now. END_OF_DOCUMENT_TOKEN_TO_BE_REPLACED

2017 is the time for that serious love and commitment and your task is to create a fabulous role for yourself. Warm, generous and full of life, a natural-born leader, Leo, has an excellent sense of loyalty and dignity. 2017 is going to be fast, so keep up especially in the work place and home life. People feel comfortable in your company, and it’s likely you’re one of the best-liked people around. Stay focused as you set goals for yourself and go after them with plenty of energy and drive. The world will be a better place because of your tremendous warmth. If you are seeking a partner, be it a long term love, business or a collaborative partner then this is the time so set the wheels in motion to find them. END_OF_DOCUMENT_TOKEN_TO_BE_REPLACED 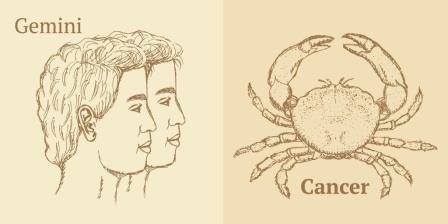 As an air sign Gemini is a social butterfly and will be experiencing more important connections and synchronicity in 2017. Your social scene is very important and your social calendar will be full. Different interests will be arising in your life and you will discover your hidden talents so don’t be afraid to try new things. You will be meeting people that will help you climb higher within your circle of interests and they will make a big impact on your life as you are very impressive and attract good fortune due to your energetic approach to life. END_OF_DOCUMENT_TOKEN_TO_BE_REPLACED 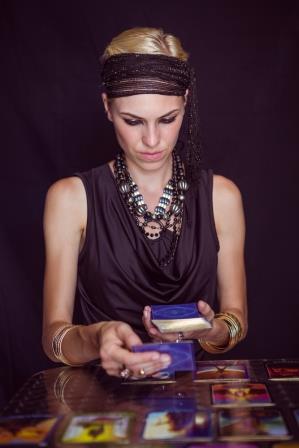 If you are fairly new to Tarot readings, you may not realise that there are many different ways that the cards can be dealt (spreads) in order to determine the style of reading. For example:

This spread is made up of seven cards, laid out from left (1) to right (7) in the shape of a horseshoe.

Card 1 looks at what in the past is influencing you.

Card 2 deals with the present.

Card 3 looks at whether there are any hidden influences.

Card 4 identifies blocks that are stopping you moving forward. 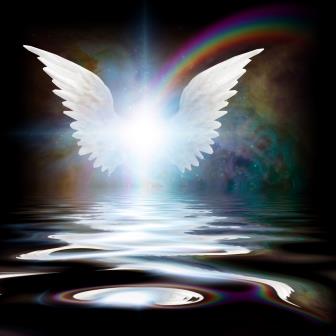 If you missed the first instalment of Ellie’s spiritual journey – then click here first.

Let me guide you and answer all of your questions…

I study all areas of life and can advise on your love life, on work, money, dream interpretation, astral travel, the animal kingdom and more…You can ask me any questions you like – I will use my gift, my third eye and I will uplift the veil and give you the answers your seek.

In my spare time, I like to go Astral Travelling, I travel to the Light and am greeted by Elders. They welcome me and show me the places over there. They educate me about the journey of life, how to conduct my psychic abilities because this is the purpose of my life.

I am born with the third eye; I see what others don’t see. I have had this ability since childhood and my mission in life is to use my psychic ability. When you start talking to me, you will feel spiritual energy coming through to you – If you are stressed, angry, hurt, you will feel my healing and at the end of the call, you will feel so much better. 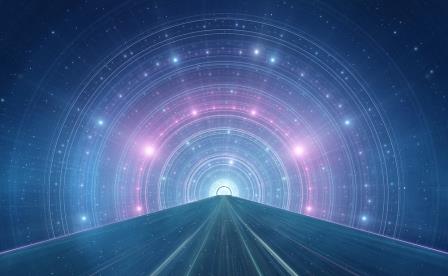 Have you ever wondered where you came from?

Do you remember your teenage years?

Do you remember being 5 years of age?

Psychic to the Stars! 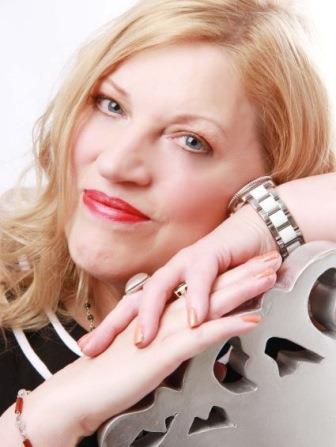 I am a psychic clairvoyant medium, I have been very blessed with my work and it has taken me to many different places; Germany, LA, Beirut, Ireland to name a few… where I have appeared on various TV and Radio shows.

I am also the UK’s only Rumpologist! A Rumpologist is a person who reads bottoms – mainly the shape of the bottom and the lines on the bottom. It is this work that gives me many opportunities to work in the media, doing readings for celebrities in very tight clothing – so I can get a good read…

Earlier this year I appeared on the Alan Carr show where I gave Karl Pilkington a reading on TV, I appeared on Loose Women six weeks ago where I read Katie Price and Adam Hill on air and also recently I appeared on American TV.

I have had various articles written in Soho Magazine Columbia. I have given guidance to many people including celebrities and the feedback has been amazing.

I never take anything for granted and I am so grateful to have so many wonderful opportunities in my working life. If I can support and guide you that would be wonderful; I am direct and precise. 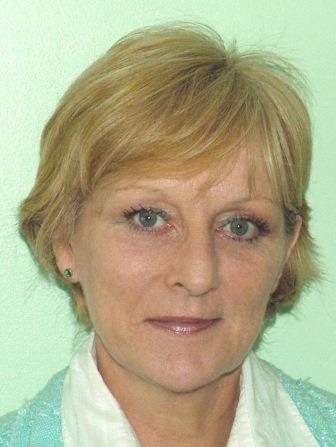 If you missed the first part of this article, then click here.

Stan Meyer made the discovery of the century when he showed us how to ‘undo’ water i.e. break the hydrogen / oxygen bond in water using resonant sound waves. He did this live on ‘Tomorrow’s World’ (black and white TV days) and poured tap water into the empty petrol tank, separated the Hydrogen which was used for combustion. The combustion process produced water from the exhaust pipe which he collected in a glass and drank. After 24 hours there was a news blackout on the subject.

He was offered £2billion at that time for the patent. He refused. He drove his prototype vehicle from Los Angeles to New York on a gallon of water.

His last words were ‘I’ve been poisoned’. All of his research was confiscated.

Royal Rife built the world’s most powerful microscopes. He was privileged to be one of the first to witness what was happening at a cellular level in the body. He noticed that cells responded to sound waves. He found that he was able to kill cancer cells using resonant sound waves. He was given 17 terminally ill cancer patients and he cured them all using sound. Needless to say, his laboratory was destroyed in yet another ‘mysterious fire’ and his research papers confiscated.

So the wave function of sound and colour will open many doors when the information can no longer be supressed. We are now into a creative cycle in our solar system after 21Dec 2012 and hopefully working with sound, colour and other wave functions will provide us with free energy and medical breakthroughs.

Sadly, we live in a world of artificial light, unhealthy electromagnetic fields and being bombarded by radio and TV.

On top of that we create our own incessant noise inside our heads otherwise known as the commentator or the monkey on the shoulder.

So step back and be the witness to the thought and just notice it as it happens.

If all is one, then the experience of the one will be the wave and not the particle. 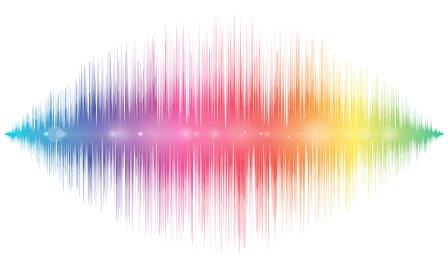 In the beginning was the word…

You may have noticed that what appears in TV and movie Sci-fi ends up becoming fact and truth.

For those that are old enough to remember Close Encounters of the Third Kind, you will remember that the film ended with the ET’s starting to teach us a tonal vocabulary and that every note was matched to a shade of a colour.

Since that film was made, we have discovered that sound and colour are intricately linked. They are both a wave function and they are forty octaves apart, so A-sharp for instance is a particular shade of red. This will tie in with people who have the condition Synaesthesia. This used to be regarded as an illness but is now being talked about as phenomena. It is interesting that this phenomenon happens in the brain where we do actually have ‘brain waves’, another wave function.

The medical profession talk about Synaesthesia as a crossing of the senses whereby people may have a colour or even a flavour / taste for a number or day of the week. I know of somebody whose brother does maths using colour.

So sound is a wave, colour is a wave and we have brain waves.

So where else is / has the study of sound proved interesting?

Cymatics shows us how geometric form and maybe the periodic table could be held together using sound. When you sprinkle sand or a powder over a drum skin for instance and direct a particular sound / vibration to the drum, then the sand / powder takes on a geometric form – as the vibration is changed the geometric shape changes into something completely different.

Some of the images remind me of crop circles…

Recent research has shown us how we can use sound to levitate light objects. I remember reading an article years ago about a professor from Oxford who witnessed and filmed Tibetan monks levitating heavy stones using sound by chanting.

Come back to the blog next week for the rest of the article.