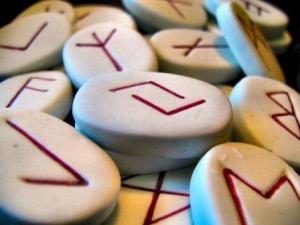 Runes are shrouded in mystery, partly due to their complex meanings. They are said to have originated in Scandinavia, as an ancient form of alphabet. It was some time later before they were used for the purpose of divination, at that point they were known as the Elder Futhark. Originally Runes were carved into small pieces of wood, but nowadays they can be found carved into many different materials. Traditionally they are kept in a fabric pouch. As well as casting to divine the future, folk select their favourite Rune/meaning and keep them close to act as talismans. They can also be used to enhance meditation, or as a singular divination tool when you want a specific question answering.

Norse legend just underlines further the allure and power behind Runes, the story goes that Odin who was the god of magic and the underworld, impaled himself with a spear and was hung by his feet from branches of Yggdrasil (Tree of the World), over the course of 9 days and nights, he searched for enlightenment and was eventually rewarded with runes lying on the ground below.

Runes offer a different type of reading from other forms of divination, Tarot for example, as they are not as clear-cut, instead they offer broad picture answers, and often the results need careful analysing and inner-reflection. There are slight variances in the names of the Rune stones, and equally different interpretations of the meanings, these meanings can be further altered when the stones are inverted.

There are different methods for casting Runes, a spread can be formed, by selecting a certain number of Runes and placing them in a special pattern. They can also be thrown from the bag on to a cloth and only those that land face up would be interpreted. Or a person can think of a very specific question and select one Rune from a shaken bag, and the tile is used to give guidance on the situation.

Fehu – Concentrate on things that nourish you and your soul on an emotional, spiritual and physical level.

Uruz – Take responsibility for your actions, using your strength of character.

Thurisaz – You may find yourself in a disruptive period, whilst it is chaotic a reason will bear out in the end. The situation may feel like it has come out of nowhere, but weather the storm.

Ansuz – It is a time for communication, pay careful attention to both listening and talking. Looking back, offering/receiving advice or sharing wisdom are all possible.

Come back next week for interpretations of the rest the Rune Alphabet.